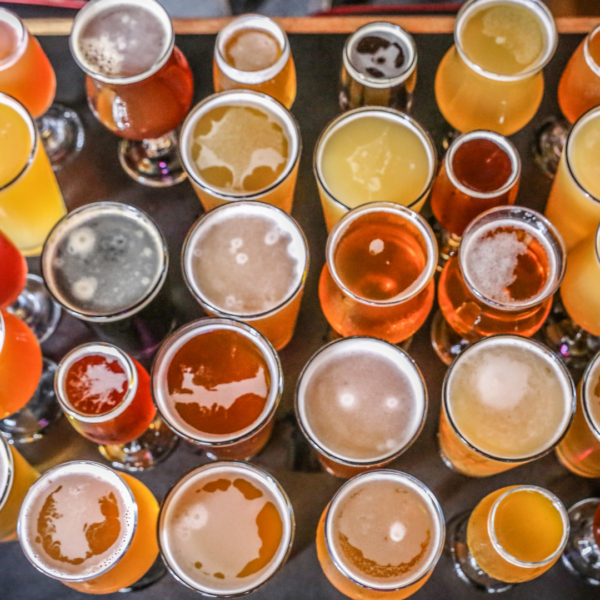 Americans love a lot of things. Sports, pickup trucks, and the feeling of not being tied down to any pressing obligations during the weekend. Speaking of which, a beverage of the sudsy variety is the perfect way to celebrate some well-deserved downtime. But before you head to your favorite watering hole or the store for a six-pack, we’ve got some insightful information to share with you.

While you might be used to drinking mass-produced beer such as Budweiser or Coors, there are much better options for you to enjoy. You’ve most likely heard of craft beer, and you may have thought about why it continues to rise in popularity. We assure you, these fanciful libations aren’t just for hipsters. Let’s crack open a cold one and find out…

“Now That’s a Beer of a Different Color!”

If you’ve ever poured a beer into a mug or pilsner glass, the color is unmistakable. Domestic beers tend to come in varying shades of yellow. Many domestic brands are produced in mass and contain additives to mask the off taste of some of the ingredients. Domestic beer tends to be inexpensive due to these variables.

Now, if you’ve ever bought some of the well-known craft beers such as Sierra Nevada or Sam Addams, you’ve probably taken notice of their thicker and more fulfilling texture and darker colors. That color doesn’t come from trickery such as food coloring. Craft beers tend to be made in smaller breweries and utilize better ingredients such as hops and barley to provide a better product. Because they’re not produced in massive batches, the need for preservatives and additives is virtually nonexistent.

So, you see, the difference of color is a matter of quality versus quantity.

Stimulate Your Senses Along with the Local Economy

Buying craft beers will do more than give you a tasty libation. By supporting craft beers made from local breweries, you’re doing a good deed for your community. Supporting local businesses stimulates the local economy and promotes necessary growth in the community. Who knew that drinking beer could make for a good cause?

At Coastal Kitchen, we serve up the best drinks, domestic and craft alike. For a full menu and a new world of dining options including the best burgers, visit us at 12 East Main Street in Bay Shore, New York. We can call us at (631) 665-3030.