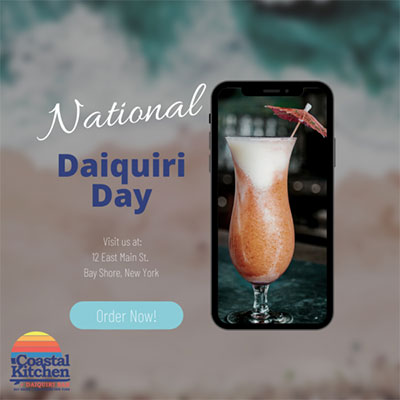 Are you a lover of coastal flavors? Is your go-to cocktail a drink that helps you feel relaxed and refreshed? If so, celebrate National Daiquiri Day with Coastal Kitchen.

National Daiquiri Day is July 19. A daiquiri is a cocktail with Cuban roots. The beverage is made with a Bacardi base, sugar, lime, and ice. The simple, sweet cocktail is smooth and refreshing, making it a favorite among many.

Legend has it the daiquiri was first created by miner Jennings Cox. Cox was supervising a mine in Daiquiri, Cuba during the Spanish-American War. After work, Cox and his co-workers would gather at a local bar. It was there where Cox mixed Bacardi, sugar, and lime into a glass of ice. This drink became known as the Daiquiri, named after the Daiquiri mines. In the late 1890s, the drink became a staple in Havana.

The daiquiri made its way to the United States in the 1900s. The beverage was introduced by Rear Admiral Lucius W. Johnson, who brought the recipe to the Army & Navy Club in Washington, D.C. In the 1960s, President John F. Kennedy was known for drinking daiquiris on his sailboat. Then, in the 2000s, Andrew Deitz introduced the “Daiquiri Time Out,” which grew to notable popularity in the Boston bartending community.

At Coastal Kitchen and Daiquiri Bar, we’re known for our daiquiris. We have both classic and frozen options for you to choose from. Try our blackberry rhum daiquiri made from rhum agricole, Bacardi Superior white rum, blackberry, and fresh lime. We also have a papa doble hemingway daiquiri made from Bacardi Superior white rum, fresh grapefruit, fresh lime, and maraschino. If frozen daiquiris are more your style, you might enjoy our pina colada, Miami Vice, BBC, and mezcal grasshopper cocktails.

This National Daiquiri Day, there’s no better place to visit than Coastal Kitchen . We’re open from noon to 10 p.m. on July 19 and we hope to see you here then!