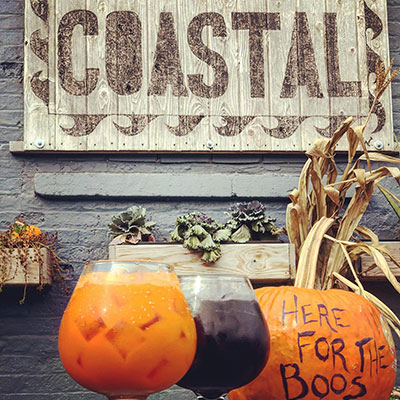 Seeking some plans this Halloween? If so, you can celebrate Halloween at Coastal Kitchen! To learn about the history of Halloween, just continue reading.

During Samhain, the Celtic people would dress in costumes to disguise themselves from ghosts. They also had feasts and made lanterns out of gourds (much like today’s jack-o’-lanterns). Samhain also included games, like apple bobbing and fortune-telling. As the years went on, these traditions made their way to the United States. Children dressed up in costumes and trick-or-treated, going door to door asking for soul cakes. This treat was similar to a biscuit and was baked as a way to celebrate All Souls’ Day on November 2. Eventually, during the early to mid-1900s, houses passed out candy, rather than soul cakes, and modern-day trick-or-treating was born. Now, adults get in on the fun by throwing their own parties, complete with costumes, games, booze, and candy.

You can celebrate Halloween at Coastal Kitchen this year! On Halloween, visit our restaurant and bar at 12 East Main Street, Bay Shore, New York, 11706. We hope to see you this Hallows’ Eve!