A Guide To Craft Beer 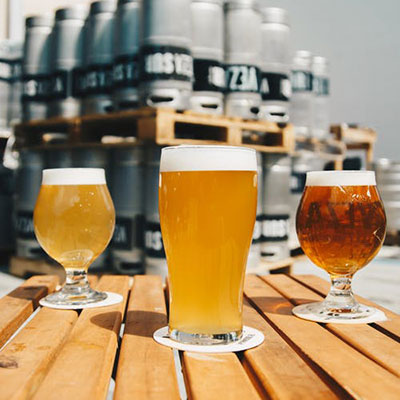 Beer has a near-universal presence around the world, serving as the go-to drink of choice for relaxing and socializing. When beer began to be produced on an industrial scale, massive breweries began to turn out case after case of relatively bland body-less beers for mass consumption. This trend continues to this day, but the resurgence of fine beer brewing has made it possible to stray from the beaten path and explore the full possibilities of beer once again. Craft beers, as they have become known, are the result.

Beer is ultimately just grain, water, yeast, and hops. The grain is heated in water, after which hops are added. The resulting liquid is cooled and mixed with yeast that slowly ferments the liquid to produce alcohol. Varying the amounts and types of these ingredients and tinkering with temperatures and times can produce an endless range of possibilities. Craft beers are the result of such experimentation.

Most craft beers are ales, which includes varieties such as pale ale, brown ale, porter, stout and hefeweizen. They are produced year-round but are often sold as seasonal beers aimed at fall and winter. Through the different applications of roasted grains, hops and alcohol content, these beers have more body and richness than the standard fare.

India Pale Ales, or IPA’s for short, are one of the most popular variants of ale. Originally forged by the English with the aim of preserving beer supplies on long voyages to India, IPA’s tend to feature higher alcohol content. Additional floral accents and flavors, such as grapefruit, pine, and resin, are often key features of a good IPA.

Separate from ales, lagers are another popular form of beer. Lagers are ‘bottom-fermented’ and sit for longer periods of time during their production. Lagers tend to be smoother than ales, although there are fewer taste variations that are possible. Nonetheless, lagers are eminently popular and the big producers, such as Coors and Budweiser, produce lagers as their mainstay.

All in all, craft beers have soared in popularity over the last decade and feature in any establishment worth its salt. If you would like to experience craft beer firsthand, we invite you to check out what we have to offer at Coastal Kitchen. Featuring the best ‘coastal’ inspired food, drinks and daiquiris in Bay Shore, we look forward to showing you what you’re missing.